Summary:
This fieldwork aims to collect archaeological records of human behavioral changes from the late Middle Paleolithic to the Early Upper Paleolithic, during which Neanderthals disappearred and anatomically modern humans increased their population in the Levant. Sevaral sites in the Jebel Qalkha area have been known to belong to the relevant time periods. The research is conducted in collaboration with Donald O. Henry (oversea collaborator of Research Team A02). 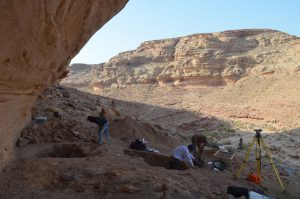