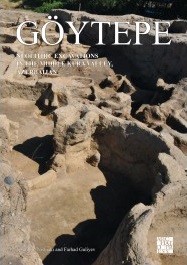 Details:
Göytepe: Neolithic Excavations in the Middle Kura Valley, Azerbaijan, publishes the first round of fieldwork and research (2008-2013) at this key site for understanding the emergence and development of food-producing communities in the South Caucasus. Situated close to the Fertile Crescent of Southwest Asia, where Neolithisation processes occurred earlier, research in the South Caucasus raises intriguing research questions, including issues of diffusion from the latter and interaction with ‘incoming’ Neolithic communities as well as the possibility of independent local Neolithisation processes. In order to address these issues in the South Caucasus, a joint Azerbaijan–Japan research programme was launched in 2008 to investigate Göytepe, one of the largest known Neolithic mounds in the South Caucasus. The results of the first phase of the project (2008-2013) presented here provide rich archaeological data from multi-disciplinary perspectives: chronology, architecture, technology, social organisation, and plant and animal exploitation, to name a few. This volume is the first to present these details in a single report of the South Caucasian Neolithic site using a high-resolution chronology based on dozens of radiocarbon dates.